Images of faraway places are often the source of inspiration to start planning a holiday. Airline companies in the 1950s quickly realized this and tapped into their hugely persuasive power.

Travel posters boomed in popularity as a way for airlines to encourage travelling and promote their services. The posters were heavily image-based and used appealing illustrations to highlight the comfort and excitement of air travel.

This article about United Airlines posters is one of a series of five articles about airline vintage posters. Other airlines which are covered are TWA, American Airlines, Swissair, and Air France.

The travel and tourism industry, including major airlines, used vintage posters to sell dreams to the public and thereby poster artist designed some of the most iconic and fantastic vintage posters.

Post-World War II was the golden age for travel. Commercial air travel dramatically increased and United Airlines was a major contributor to the growth in domestic air travel. 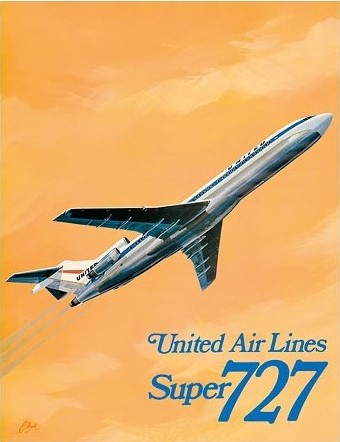 The History of United Airlines

United Airlines was founded in 1926 as Varney Air Lines. The company initially began as one which carried mail, but within just one year it became the first airline in America to carry fare paying customers coast to coast. This achievement sparked a rapid increase in interest and development around commercial air travel within the United States.

William A. Patterson was head of the newly formed United Airlines between 1934 to 1966. He led the airline to incredible domestic success. The pioneering coast-to-coast route from New York to San Francisco via Chicago became United Airlines signature and highly popular “Main Line” route.

The “Mainliner” fleet of propeller aircrafts crisscrossed the US borders seemingly non-stop. The iconic silver airplanes with red, white, and blue markings became familiar sights in the sky and at airports across America. In 1955 United Airlines inaugurated the revolutionary first direct flight between San Francisco and New York.

United Airlines continued to be a ground breaking airline throughout the years. They were the providers of the first inflight meals with the opening of the first US flight kitchen in 1936. They were also the first airline to offer all cargo flights (1940).

United’s service extended to Hawaii in 1947 and by 1984 United Airlines was the first airline to offer air travel service to all 50 of the US states. By the 1990s, United Airlines was a major international carrier with worldwide services and customer base.

The airline went through several mergers and acquisitions over the years – such as Capital Airlines in 1961 and Continental Airlines in 2010. To this day, United Airlines is still a successful company. A lot of this longevity and accomplishment can be attributed to successful branding and visual identity which their 1950s and 60s travel posters helped establish. 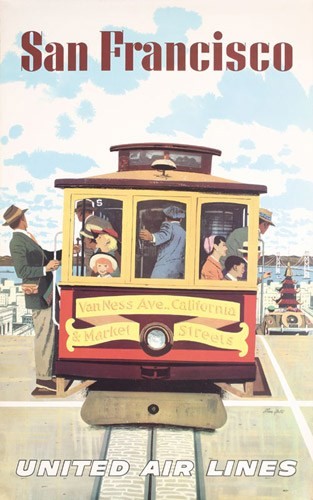 The Visual Identity of United Airlines

In the 1940s, competition and interest in the world of air travel increased and so a distinct brand strategy and visual identity was crucial to differentiate an airline. United Airlines’ CEO “Pat” Patterson achieved distinction by steering United Airlines’ design back to the aircraft. This contrasted with other travel posters at the time which were focused on destinations and idyllic scenery – often an airplane wouldn’t even feature at all.

United Airlines distinguished themselves by bringing the attention of their travel posters to the marvel and delight of flight itself.  Patterson achieved this by establishing “The Rule of Five”. These were the five core values that always needed to be representative of United Airlines and include safety, passenger comfort, dependability, honesty, and sincerity.

United Airlines had a massive brand overhaul in 1955. Noted designer, Raymond Loewy, was hired to do the rebranding which covered all spheres of the visual identity of the company – from graphic design to uniforms to interiors and more.

Loewy also developed a new logo for the company in 1961. The newly created slanted pyramid logo, alongside a standardization of the airline’s 1936 shield logo, was used by the airline well into the 1970s.

Design legend, Saul Bass – who had worked previously with United Airlines during the 1960s on a promotional short film – was called upon a decade later to update the United Airlines logo and visual identity once again.

Bass, best known as the designer of film posters and opening title sequences including Psycho, North by Northwest, and The Man with the Golden Arm, designed a new United Airlines logo in 1974. Bass felt that it helped give United Airline a coherent point of view and this tulip logo continued to represent United Airlines until the United Airlines and Continental merger in 2010.

Many airline companies commissioned notable designers to promote the jet-set lifestyle and to create brand loyalty amongst customers. United airlines harnessed this power of good design. Besides their visual identity being handled by the legendary Raymond Loewy and Saul Bass, the airline also hired top designers for all their travel poster needs. 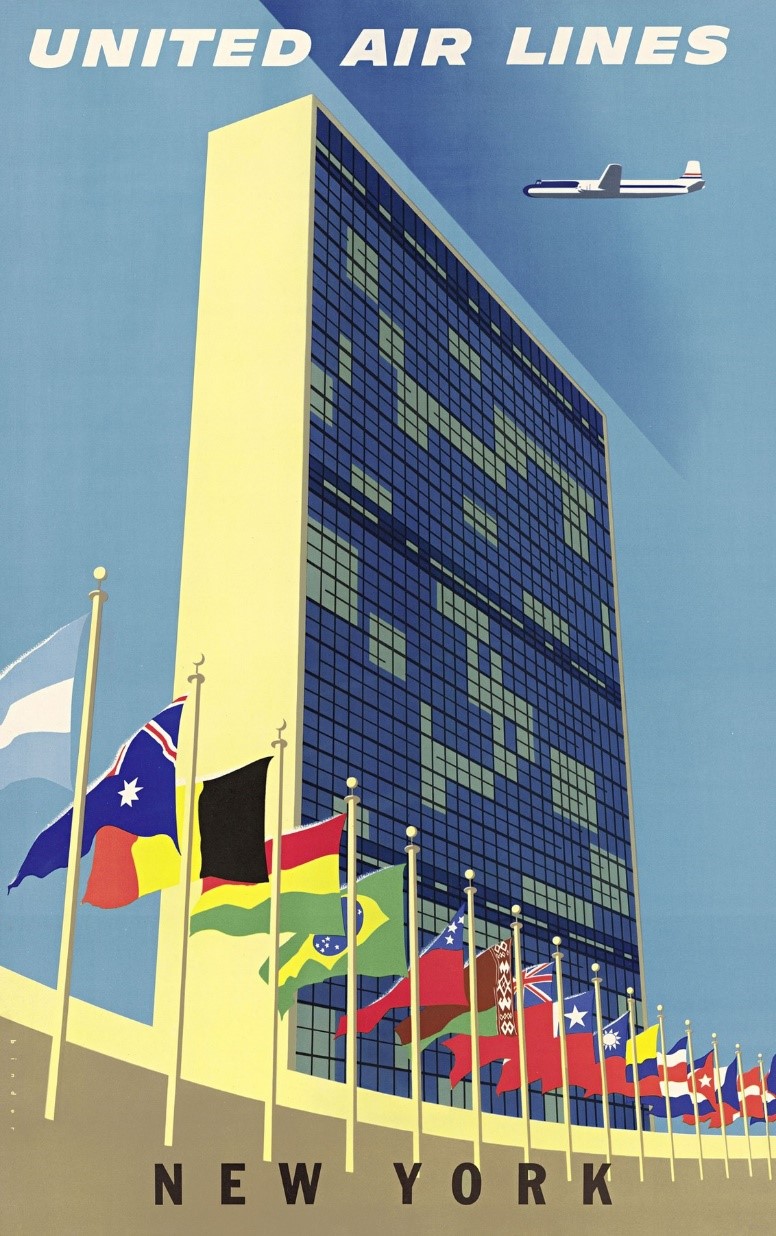 One of these top designers being, Joseph Binder (1898 – 1972). Binder was born and raised in Vienna and trained at Kunstgewerbeschule as a painter. It was there that he developed his much loved simple and expressive style.

Binder quickly became a leader in the newly emerging field of graphic design. In 1933 Binder was given the opportunity to become the graphic arts lecturer at the Art Institute of Chicago – and within the next couple of years Binder permanently moved to the United States.

Throughout the decades Binder won numerous awards for his poster designs. He saw posters as “an expression of contemporary civilization reduced to its simplest forms for instantaneous visual communication.” This outlook perfectly suited travel posters and United Airlines enlisted Binder to create many poster series during the 1950s and 60s. 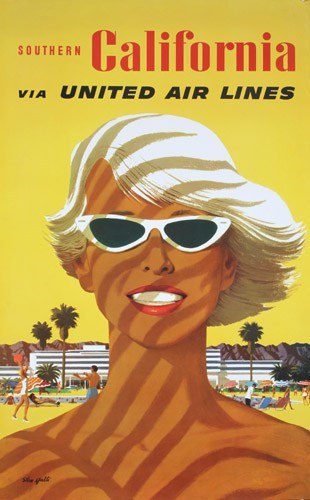 Another prolific designer that United Airlines called upon for travel poster design was Stanley Walter Galli (1912 – 2009). He was a San Francisco native and he studied at the California School of Fine Arts and the Art Center School in Los Angeles.

He started his impressive career as an illustrator in the late 1930s and quickly gained huge success. Galli created beautiful, illustrative posters for the airline during the late 1950s through the mid-1960s -many of which are the airlines most iconic.

One of United Airlines most noteworthy travel posters’ is the one created by Joseph Binder in 1957 showcasing the Pacific Northwest. It is, true to the style of the genre, an idealized image – one of sailing boats on serene blue water with the areas volcanic Glacier Peak mountain in the background.

There is also a plane flying overhead on the poster which is a continuous element throughout most of United Airlines’ vintage poster designs. The poster is rendered in the classic United Airlines reductive style with a flat but vibrant colour palette that perfectly captures the excitement of travel and the beauty of the region advertised.

Another famous United Airlines poster is the one Stanley Galli designed in 1960 to advertise travel to Hawaii. This striking poster features a canoe filled with smiling people on calm blue waters.  The angle and perspective of the boat depicted adds thrill and movement to the dynamic poster.

This dynamism, alongside the soothing color palette and simplistic illustrative style perfectly depicts Hawaii which is what cements this poster as one of United Airlines best travel posters. The striking design uniquely captures the spirit of adventure that travel can provide – which is the ultimate goal of all travel posters. 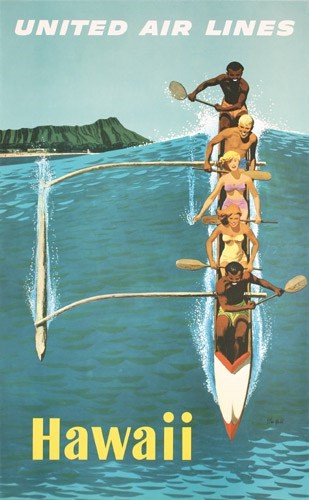 United airlines continuously achieved this goal of attracting customers to partake in air travel. In 1964 United became the first airline to carry more than 1 billion revenue passenger miles in a month.

The company’s early and continuous focus on attractive and striking design has lead United Airlines to success and longevity. United’s current 88,000 employees serve more than 100 million passengers annually with flights to over 1,000 destinations – and all this success and growth stemmed from a focus on strong design supported by strong management.

If you want to find out more about airline vintage posters or if you are looking to buy a stunning original airline poster, check out these poster galleries and collectors listed on aproposter.com: